Mariana Mota is writing a book interactively, I just answered a question she made about design feedback, and because it touched me so deeply I decided to share my own experience. I think it might resonate with other designers as well…

Tell me a story of when you have received feedback on your design work and it either frustrated you or motivated you to do good work.

What made you feel the way you felt? Who gave you the feedback? Was it verbally, how did they speak (manner, words)?

One of the experiences I had receiving feedback was when an email was sent around the office saying that a work was done and asking people to give their feedback and point out if any problems were found. I received both positive and negative feedback, the positive was in form of praise to myself (skills) or to the design and the experience that was pleasant to them; this type of feedback came via email or verbally and it was motivating, it was a recognition that I was doing “the right thing” or at least I was in the “right path” on the design process and delivery. The negative feedback was mostly in the form of “check this problem in browser x”, or “this is not working”, or “can we make it this way instead?” and they were all valid points, and where possible, the feedback generated an action and I “fixed a problem” or at least gave a reply on what cannot be done at this stage and why.

What made my experience *really* bad and unsettling (in this specific case) were a few colleagues, just around the corner from where I sit, lashing about things they didn’t like or didn’t work, talking to each other (sometimes sarcastically) and not actually passing the information in a constructive manner to myself, either verbally or via email. I found it really disappointing and felt disrespected (because I could hear it all! yet no consideration or direct approach!), some of the feedback was just personal preference and it was out of the context of the client wanted, so a few comments could be ignored, but some others were just questioning skills or technology used and a direct talk would clarify the choices, if I was given the chance.

After that experience I was more pro-active on email requests, asking that ALL feedback could be kindly passed (negative or positive) in a constructive manner via email so I could possibly address any issues.

However I still have a “scar” from that experience and it affected, unfortunately, the feedback request. I’ve chosen for a while to get feedback from strangers instead of colleagues to be able to detach myself from the whole experience. I know that this doesn’t stop feedback that is not constructive to come around, but at least I don’t get it from people that I see every day.

On a personal note: I keep reminding myself that is a learning curve, that is hard to be detached from the design “baby” that was created. Designers (and other professionals) involved in the design process have to be constantly reminded of that need of detachment, so we can progress with the project/product.

I was happy to participate on the Responsive Day Out this year. Loaded with great speakers, some familiar faces and many tips, was a great way to either reinforce already acquired knowledge (from practice and other conferences I’ve been) and also learn some new interesting stuff!

Below are my humble notes but nevertheless “my” notes and I also included audio and slide links on this post. 🙂

Audio for this session

She mentions Mark’s post about the use of newspaper-like structure, saying that constraints are good and she likes to design with constrains. Check his writings at http://markboulton.co.uk/journal

She tested Browserstack (which I personally recommend, it is a great tool for testing your site in different browsers and OSs) with CrazyEgg for heat testing. It is good to know where your users’ click (and don’t click).

Sarah and her team are making use of pattern libraries which describe where and why to use an element within a site; but highlighted a difference in between pattern libraries and style guides – the latter just describes each element (this is a button, this is a quote, etc.)

She finalises that her process is adaptive and the work carries on.

Audio – and – Slide for this session.

My notes:
Remember the fullscreen size not always is used as it is, user might resize the browser then you need to consider the viewpoint.

List navigation on mobile hides the content, try to use a smaller (two lines) menu. Check site Gloople and Clearleft website itself for examples of navigation when different screen sizes are chosen, pay attention on menus and icons.

But what about soul? blog post and menu brings a table of contents ‘with overlay’ on top of full page.

University of Surrey – focus away from menu on a more ‘magazine’ style for discovery.

This Is Responsive – Patterns, resources and news for creating responsive web experiences. bit.ly/TIRWD 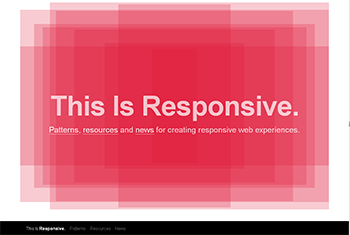 Works for BBC, working with many devices, supporting different browsers.
Audio – AND – Slide for this session.

Premium experience > Not rubbish (ok) > Not supported. They started building from ground up. Simple page across as many browsers possible. Use css (2) to style the main feature (without javascript). Then they create enhanced experience with javascript and they give it to browsers that only use querySelector, localStorage and addEventListener.

Educating client, instead of ‘telling them what has to be done’. Also experimenting with technologies and features without having the sign-off.

Options:
1. default appears at it loads
2. dont’ send webfonts to small screens
3. show tet in the fallback fonts until all web font loads
4. swap fonts one by one as they load

Web font loader – The WebFont Loader is a JavaScript library that gives you more control over font loading than the Google Web Fonts API provides. The WebFont Loader also lets you use multiple web-font providers. It was co-developed by Google and Typekit.

Mentioned to use icons as fonts instead of bitmap versions. If creating something more complicated use SVG.

His step-by-step on Using Fonts for Resolution Independent Assets

Also, an amazing tool that I should be using soon: IcoMoon – is a custom icon font builder, which allows users to select the icons they need, and make them into a font. Basically you can upload an SVG file and download a font file.

Josh uses Fontforge to create font sets. He created forecast.is using Climacons icons. The project can be found at: github.com/joshje/forecast

He also mentioned about the ligatures used on the fonts where instead of just leaving a symbol on the font set you can give it a meaning, so the ‘sun’ icon would have a ‘sunny’ meaning for his forecast.is application, and on the html what would appear is a legible ‘Sunny’ instead of any code. However, ligatures have to be set on browsers, using:

We have multiple devices and would like to have consistency across. (My obs: she gave a very nice presentation and selected great icon sets)

We have to have balance between Ideals and Practicality.

Core of the design system: 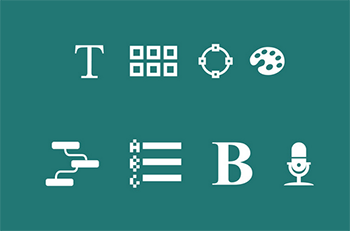 What you are going to make it similar and what it would be differentiate in between different ddevices. She advocates same content no matter what device.

We should detach our design from the viewports, they will be different, and continue to grow different.

Do not stick to one tool, choose the best tool for the job today. Examples:

Mockup to create design ideas to developers, clients, etc. but mockup on different viewports – how the design “might look” at some different devices and points in time – (optimum points according to context).

Right or wrong directions? – people ditching responsive design because only 2% of their users use mobile (the article I believe he was quoting is https://gocardless.com/blog/unresponsive-design/. Speaker said it is not just about mobile, RWD is/should be design agnostic.

Risky, Wild Decisions – higher cost to companies/people in a way is an investment on yourself, on your skills, on the people in your team. Important for a designer to code too, at least the basic html/css to be able to test on browser.

Sofa talk with Laura, Elliot and guys from Clearleft

“the web has been always free” we’re starting to use it as before again, with the tools as advantage to go beyond to the default. Using the tools/knowledge instead of trying to retro-fit.

Mobile website can be the starting point for some business, but often (in their opinion) it can be replaced to a fully responsive site.

Careful in creating high expectations: creating the Photoshop mockups can be dangerous, high-fidelity and ‘perfect’, where something online will be different depending on the browser.

Although devices are becoming ever more powerful and feature-rich, less capable devices continue to be developed as well. Paul Lloyd – The Web Aesthetic, A List Apart

Trade off on webfonts: progressive enhancement: support woff and fonts in local storge.

Trade off on responsive images: oocss, SMACSS, module patterns, systems, components – instead of media queries and they shouldn’t refer to media queries.
Picture element – use of image according to size of view port.

Karen Luke website
Choice of filling viewport or not.

No body know better than audience.. They told a story that a blind man entered a skateboard store asking for a skate and sales person said: “how? why? you are blind!” but the skate was for his son. The store could potentially lose a client there…

Book recommendation: The Elements of Typographic Style by Robert Bringhurst

The Edge of the Web – Paul Robert Lloyd – @paulrobertlloyd

Main: is meaning, design is enhancement

In between – Mark Boulton

Lots of people say “we broke the web”, we didn’t, we transformed the chaotic fluid web to something more comfortable.

To get rid of this discomfort forcing the fluidity. “fluid first design” then progressive enhancement and lots of tweaking.

The Responsive Day Out website has audio recordings of all 17 sessions (downloadable mp3) and also some of the slides from the speakers; the Lanyrd website have a complete coverage with pictures, audios, videos, slides and other blog posts from people that contributed to document this event.